This post doesn't lend itself to an Executive Summary. It's written in memory of Nikki Grahame, who lived most of her life with anorexia and tragically died on April 9th, 2021 at the age of 38.

The post covers the definition of anorexia from the Diagnostic and Statistical Manual of Mental Disorders and how this fails to capture the essence of the condition. It shares my experiences, of food as a means of control, as a teenager. It covers the incidence of, and prognosis for, anorexia and mortality rates from the condition – the deadliest of all mental health issues. Finally, I address the conundrum of anorexia and the challenge of recovery.

The tragic death of Nikki Grahame was announced on Saturday 10th April 2021 (Ref 1). She had died the previous day – the same day as Prince Philip. Nikki was born in 1982 and was just 38 when she died. She became known when she appeared as a contestant in the seventh series of Big Brother UK in 2006. She was hugely popular and was voted back into the house after being evicted. Nikki was TV gold – bubbly, funny, unpredictable, and loveable. She had a couple of meltdowns that, 15 years later, still rank among the best ever TV moments. Nikki won a National TV award for most popular TV contender.

Nikki was also a person who lived with anorexia for almost her entire life. Her mother recalled that Nikki was seven when she started to avoid eating (Ref 2). Nikki was first hospitalised at the age of 12 after a suicide attempt. Nikki shared her experience of anorexia in two books, Dying to Be Thin (2009), and Fragile, which was published in 2012. 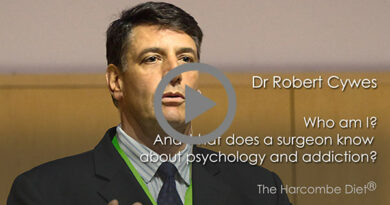 Dr Robert Cywes – Who am I? And what does a surgeon know about psychology and addiction? – LCHF Convention South Africa