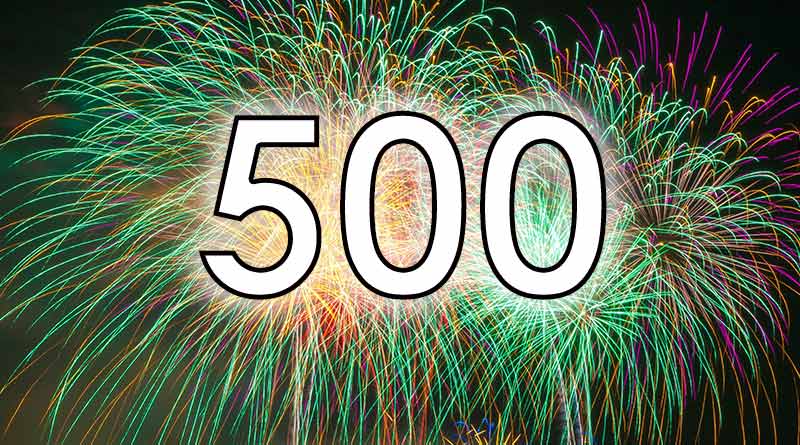 This is the 500th Monday note! They started in January 2011 in our online club www.theharcombedietclub.com and then became a thing in themselves. Since 2014 they have also been posted on zoeharcombe.com (some from earlier years are also on this site). At an average of approximately 3,000 words, 1,500,000 words have been written – that’s 15 weighty books. The executive summary was introduced at the start of 2019, although this particular note doesn’t lend itself to an executive summary.

The most popular posts

1) The single most popular post was called “How statin drugs really lower cholesterol and kill you one cell at a time.” This was written in October 2013 and it was a summary of the book with that title. The authors came across the post and we became connected, which was a nice outcome (Ref 1).

2) The second most popular post was one that is on the list for upcoming Monday notes, as I have just managed to get data to update it. This one was written before I formally started the Monday note. It was a post written after some research undertaken while I had a couple of hours to spare before a rugby match (Ref 2). I used World Health Organisation data to plot death rates from all causes and from cardiovascular disease (CVD) and country average cholesterol levels for men and women. Four charts were drawn:

i) CVD death rates and cholesterol for men;

iii) all death rates and cholesterol for men; and

iv) all death rates and cholesterol for women.

3) The third most popular post was written in 2015 and it was written to answer queries about cholesterol and statins (Ref 3). I did a ‘signpost’ article to direct people to information if they were keen to explore counters to the cholesterol hypothesis. For example, one of the articles referenced was the one written by Kristensen et al which showed that, in studies where statins were taken for between 2 and 6 years, the median postponement of death for primary and secondary prevention trials were 3.2 and 4.1 days, respectively (Ref 4). Most people who read that decide that statins aren’t worth taking.

4) The first non-cholesterol/statins article in the top rankings was the slaying of the calorie theory. I threw out a challenge in 2014 “The calorie theory – prove it or lose it” and it still hasn’t been proven (Ref 5). The post was an extract from my 2009 book “The Obesity Epidemic: What caused it? How can we stop it?” During the research for that book, I was struggling to find the source for the calorie theory and so I decided to approach seven UK organisations to ask them for the evidence behind the statement “One pound of fat contains 3,500 calories, so to lose 1lb a week you need a deficit of 500 calories a day”.

The seven organisations were the British Dietetic Association (BDA), Dietitians in Obesity Management (DOM), the National Health Service (NHS), the National Institute for Clinical Excellence (NICE), the Department of Health (DoH), the National Obesity Forum (NOF) and the Association for the Study of Obesity (ASO). To cut the story short, all of these use the calorie theory and should have known why they do, but none of them had a clue.

Two organisations attempted an answer, but they both referred to the same study of 12 people given a deficit of 600 calories a day who spectacularly proved the formula wrong. As my post said: “There are 1.1 billion overweight people in the world and we can’t prove a formula using 12 of them.” This post thus highlighted the lack of evidence underpinning the seminal claim in the world of dieting – create a deficit of 3,500 calories and you will lose 1lb of fat.

Notice how red meat and cancer quickly became “probably” and “bowel cancer.” The headlines claimed, “each 50 gram portion of processed meat eaten daily increases the risk of colorectal cancer by 18%.” So now we’re down to just processed meat. The absolute risk of this 18% relative risk turned out to be approximately 8 in 100,000! Even if this were causation and not association and even if this withstood the other caveats I detailed in the note, 8 in 100,000, who cares?

6) Low carb diets were the subject of the sixth most popular post. This was my response to the classic Seidelmann et al article in The Lancet in August 2018 that low carb diets could shorten our lives (Ref 7). There were so many things wrong with this article that I focused on ten (which were as significant as not having adjusted for alcohol consumption). The most important issue was that low carb diets were damned without having been studied (this happens all the time). The average carbohydrate intake of the lowest fifth of people studied was 37%. That’s a high carb diet to anyone who eats a low carb diet. Just 315 out of over 15,000 people studied consumed less than 30% of their diet in the form of carbohydrate. This paper bore no relevance to anyone actually eating a low carb diet.

Nina Teicholz and I separately managed to get letters published in The Lancet to rebut the article, but only after the article had enjoyed months of scaremongering and it’s still often cited today (Ref 8).

7) The EAT Lancet diet grabbed the seventh spot (Ref 9). This was published on January 17th, 2019. The diet was so detailed that I assumed they would have checked that it delivered basic nutrient requirements. It took less than an hour to enter the diet into a nutrient tool. The EAT Lancet diet was based on an adult male. An adult female would likely consume four fifths of the diet and thus four fifths of the vitamins and minerals. Even for the male, the EAT Lancet diet was deficient in the following nutrients: B12, Retinol, Vitamin D, Vitamin K, calcium, iron, and omega-3 essential fatty acids (in the form required by the human body).

There were other stunning aspects of the diet, for example the fact that it recommended more calories from nutritionally-void sugar and caloric sweeteners than from beef, lamb, pork, eggs, and fish combined.

I submitted a letter to The Lancet, but they refused to publish it (Ref 10). Now that we know that the EAT Lancet diet was part of “The Great Reset”, it’s probably not surprising that dissenting voices were not allowed.

8) The first post I wrote on COVID-19 came in at number eight, which is the highest recent post (Ref 11). This was written just before the UK lockdown and it presented some facts and figures about coronaviruses generally and COVID-19 particularly. Two passages particularly have survived hindsight well:

“The single most important thing to say about the numbers is that they’re wrong.”

“There’s a lot of ‘scaring the life out of people’ going on right now – in print and online media and on social media. It isn’t helpful. Caution yes, catastrophising no. I hope that we will look back on this time and see that the above table was reflective of the outcome and COVID-19 barely made it onto the list of major causes of death for any country.”

We can indeed now look back and see that the numbers have been wrong – in ways we could not even have imagined when it comes to false positive in tests and track, and trace fiascos, and deaths with COVID-19 vs deaths from Covid-19. We can also look back on this time already and confirm that COVID-19 has not made its way onto the list of major causes of death for any country or the world as a whole.

9) In March 2014, global headlines claimed that animal protein was as bad for human health as smoking (Ref 12). I entered into communications to try to get raw data from the researchers. They refused but someone called “Sam” posted a query next to the academic publication and one of the researchers replied and that was all I needed to dissect the article. It turned out the “four times more likely to die” global headline grabber was based on a reference group of six deaths. Yes, six deaths. And not just 6 deaths – but 6 deaths over an 18 year study. And the ‘researchers’ tried to claim that animal protein is as bad as smoking based on this! (Ref 13).

10) I’m quite pleased that one of my five-a-day posts ended up in the top 10, as it’s something I’ve become known for (Ref 14). “Five-a-day: The Truth” is the main five-a-day post on my site (Ref 15). “The perfect five-a-day?” is the post that made the top 10. This one analysed the essential fats, protein quality, vitamins and minerals in chicken liver, sardines, eggs, sunflower seeds and kale (five foods I know to be nutritious) and compared these with the same nutrients for apple, banana, orange, carrots and peas (typical fruits and vegetables in five-a-day). The contest shows that the fruit and veg five-a-day cannot compete with five genuinely healthy foods, so why do we continue to promote the myth of five-a-day?

Posts that have become the headlines

A few posts have become the headlines themselves. The full media coverage page is here (going back to 2009) (Ref 16). I turn down most media requests nowadays, as they are quite disruptive. Some of my favourites were these:

In 2014, “Five fruit and vegetables a day is a fairy story so seven-a day is an April Fools’ joke” was published in The Mirror (Ref 17).

Also in 2014, “Gastric bands are as useful as a plaster on a severed artery” was published in The Independent (Ref 18).

Feb 2015 saw the biggest coverage from any article of mine. The first paper from my PhD was published in BMJ Open Heart and it was picked up by print and online media globally from Time Magazine to the Sydney Morning Herald. I did almost 30 radio and TV interviews on the day of publication alone. This was the paper that concluded there had been no evidence for the introduction of the dietary fat guidelines at the time they were introduced. My favourite article on the topic was written by Janet Street-Porter in The Daily Mail, who was outraged to realise “‘I gave up the most glorious food on earth FOR A LIE.’” (Ref 19).

In October 2015, the Mail on Sunday covered my response to the World Health Organisation red meat claims: “A disgraceful scare story – so don’t bin your bacon sarnies” (Ref 20).

In 2016, the British Journal of Sports Medicine posted one of my blogs “Will whole grains make you live longer?” (Ref 21). The answer is “no” of course.

In 2016, The Telegraph covered “Row erupts over claims Government’s healthy eating guide was ‘not scientifically tested‘” (Ref 22). This was one of a number of articles and BBC interviews, which followed an academic article in the BJSM “Designed by the food industry for wealth, not health: the ‘Eatwell Guide’” (Ref 23).

My Evolocumab/PCSK9 article (showing that “there is no evidence of benefit for Evolocumab in any circumstance for which NICE recommends it” (Ref 24)) led to The Telegraph covering the story with the headline “‘Hugely expensive’ cholesterol drug prescribed on NHS does not prevent fatal heart attacks or strokes, say experts” (Ref 25).

It remains for me to thank each and every one of you for the support you have given me over the years, or even months, or weeks. I could not do this without your support as recipients of the Monday note. You enable me to stay truly independent from any third party funding. You enabled me to tell Kellogg’s where to go when a dietician approached me to see if I would do some work for them. As if!

Thank you! Here’s to the next five hundred!

All the best – Zoë

What pregnancy and meal frequency can teach us about weight loss