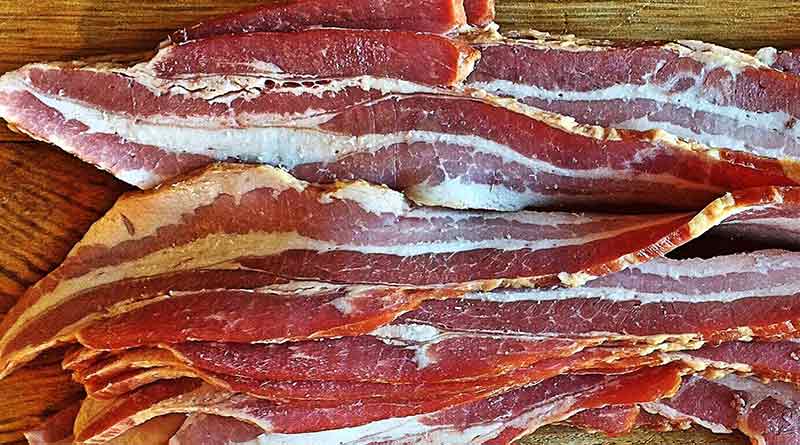 I started getting emails early on the morning of April 17th. People were sending me this story from the BBC news: “A rasher of bacon a day ‘ups cancer risk’” (Ref 1). America was reporting similarly: “Eating just one slice of bacon a day linked to higher risk of colorectal cancer, says study” (Ref 2).

Saying ‘X is as bad as smoking’ guarantees headlines and so does ‘a rasher a day will kill you.’ This kind of sensationalist reporting lends itself to media articles, as they love to make a crisis out of nothing, and pictures of bacon rashers and cigarettes are easy to find.

The headlines came from a study published in the International Journal of Epidemiology on April 17th (2019). It is on open view (Ref 3). The study itself used the rasher of bacon example – usually the dramatization occurs in the press release for the paper.

The paper used data from the UK (which at least makes a change from the US epidemiological papers, which use data from the Nurses’ Health Study and the (male) Health Professionals Follow-up Study). The database used for this paper is called “UK Biobank.” UK Biobank is a population study of approximately half a million men and women aged 40-69 years recruited in the UK between 2006 and 2010. As with all nutritional epidemiology, UK Biobank relies upon a food frequency questionnaire. The UK Biobank food frequency questionnaire asked 29 questions about diet, most of which gathered information about the average frequency of consumption of foods and food groups over the previous year (Ref 4). All the usual limitations of people trying to recall what they ate last year therefore apply.

This particular paper used data for 475,581 people (after excluding those who already had cancer). The follow-up period was approximately 5.7 years. During that time 2,609 cases of colorectal (bowel) cancer were diagnosed. The study concluded that “Participants who reported consuming an average of 76g/day of red and processed meat compared with 21g/day had a 20% [95% confidence interval (CI): 4–37] higher risk of colorectal cancer.” (I lost count of the times the paper referred to “red and processed meat”, which is the usual stunt when trying to damn red meat in the name of processed meat.)

What about potatoes, good or bad?

The evidence for dietary fat guidelines